How to use Franklin

This section is meant as a refresher if you're new to Franklin. Have a look at both how the website renders and the corresponding markdown (index.md). Modify at will to get a feeling for how things work!

Ps: if you want to modify the header or footer or the general look of the website, adjust the files in

The base with Markdown

The standard markdown syntax can be used such as titles using #, lists:

or code-blocks inline or with highlighting (note the @def hascode = true in the source to allow highlight.js to do its job):

You can also quote stuff

You must have chaos within you to ...

Note that you may have to do a bit of CSS-styling to get these elements to look the way you want them (the same holds for the whole page in fact).

If you want a dollar sign you have to escape it like so: $, you can also use html entities like so: → or π or, if you're using Juno for instance, you can use \pi[TAB] to insert the symbol as is: π (it will be converted to a html entity).[1]

Footnotes are nice too:

It is sometimes useful to have a short way to make a part of the page belong to a div so that it can be styled separately. You can do this easily with Franklin by using @@divname ... @@. For instance, you could want a blue background behind some text.

Here we go! (this is styled in the css sheet with name "colbox-blue").

Since it's just a <div> block, you can put this construction wherever you like and locally style your text.

The definitions can be introduced in the page or in the config.md (in which case they're available everywhere as opposed to just in that page). For instance, the commands \scal and \R are defined in the config file (see src/config.md) and can directly be used whereas the command \E is defined below (and therefore only available on this page):

since we've given it the label \label{equation blah}, we can refer it like so: (1) which can be convenient for pages that are math-heavy.

Note: the LaTeX commands you define can also incorporate standard markdown (though not in a math environment) so for instance let's define a silly \bolditalic command.

and use it here for example.

Here's another quick one, a command to change the color:

A quick note on whitespaces

For most commands you will use #k to refer to the \(k\)-th argument as in LaTeX. In order to reduce headaches, this forcibly introduces a whitespace on the left of whatever is inserted which, usually, changes nothing visible (e.g. in a math settings). However there may be situations where you do not want this to happen and you know that the insertion will not clash with anything else. In that case, you should simply use !#k which will not introduce that whitespace. It's probably easier to see this in action:

You can include raw HTML by just surrounding a block with ~~~. Not much more to add. This may be useful for local custom layouts like having a photo next to a text in a specific way. 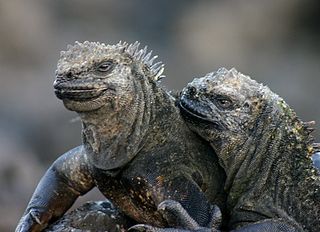 Marine iguanas are truly splendid creatures. They're found on the Gálapagos islands, have skin that basically acts as a solar panel, can swim and may have the ability to adapt their body size depending on whether there's food or not.

Note 1: again, entire such blocks can be made into latex-like commands via \newcommand{\mynewblock}[1]{...}.

Note 2: whatever is in a raw HTML block is not further processed (so you can't have LaTeX in there for instance). A partial way around this is to use @@... blocks which will be recursively parsed. The following code gives the same result as above with the small difference that there is LaTeX being processed in the inner div.

Marine iguanas are truly splendid creatures. They're not found in equations like \(\exp(-i\pi)+1\). But they're still quite cool.

Here are a few empty pages connecting to the menu links to show where files can go and the resulting paths. (It's probably best if you look at the source folder for this).

As you can see here at the bottom of the page, there is a footer which you may want on all pages but for instance you may want the date of last modification to be displayed. In a fashion heavily inspired by Hugo, you can write things like

There's a few other such functions of the form {{fname p₁ p₂}} as well as support for conditional blocks. If you wander through the src/_html_parts/ folder and its content, you should be able to see those in action.